Culture & Etiquette- Page 2​
As with any Journeys you are thrust into a different culture, and this Mystical Morocco Journey is no different. This is just some of the things you should be aware of.  ​

Sexual Harassment
Different women seem to have vastly different experiences of sexual harassment in Morocco. Some travelers find it persistent and bothersome, while others have little or no trouble with it at all. Many women compare Morocco favorably with Spain and other parts of southern Europe, but there is no doubt that, in general, harassment of tourists here is more persistent than it is in northern Europe or the English-speaking world. Catcalls are normal and common.
Harassment will usually consist of men trying to chat you up or even asking directly for sex, and it can be constant and sometimes intimidating. In part this is to do with Moroccan men’s misunderstanding of Western culture and sexual attitudes, and the fact that some think they can get away with taking liberties with tourists that no Moroccan woman would tolerate.
You should also avoid physical contact with Moroccan men, even in a manner that would not be considered sexual at home, since it could easily be misunderstood. If a Moroccan man touches you, on the other hand, he has definitely crossed the line, and you should not be afraid to make a scene. Shouting “Shooma!” (“Shame on you!”) is likely to result in bystanders intervening on your behalf, and a very uncomfortable situation for your assailant.

Misconceptions of Women in Morocco ​
It is often said that women are second-class citizens in Islamic countries, though educated Muslim women are usually keen to point out that this is a misinterpretation of Islam. While sex equality has a long way to go in Morocco, in some ways, at least in theory, the sexes are not as unequal as they seem. Men traditionally rule in the street, which is their domain, the woman’s being the home. One result is that Moroccan women will receive their friends at home rather than meet them in, say, a café (although this is slowly changing) and this can make it difficult for you to get to know Moroccan women. One place where you can meet up with them is the hammam. It may also be that if you are travelling with a man, Moroccan men will address him rather than you – but this is in fact out of respect for you, not disrespect, and you will not be ignored if you join in the conversation. In any case, however interpreted, Islam most certainly does not condone sexual harassment, and nor do any respectable Moroccans. Being aware of that fact will make it seem a lot less threatening.

Gay and Lesbian
Whilst male homosexuality is relatively common in Morocco, gay sex remains illegal under Moroccan law. The punishment for any act regarded “shameless and unnatural” can be punishable by six months to three years imprisonment and a fine. Most Moroccan gay men are very rarely open about it, and the subject remains taboo throughout the country. Despite this, there is a small and discreet gay scene in Morocco, most notably in Marrakesh.
On the other hand, lesbianism in Morocco is virtually unheard of, and as a visitor, there is very little chance of meeting any Moroccan lesbians.
​
Languages
Arabic, Berber, and French are the main languages (Spanish is also spoken in the north,) English varies, a lot of the people in the market have learned English to up their sales, and as travelers there are always ways to communicate. Your hosts speak French and some Arabic.
​
Haggling
Haggling is part of the culture their and your Hosts are experts at it. You may want to try your hand at it as well, but never be afraid to ask your hosts how much or for help to get a good price. Never settle on the first offer in Morocco.
Keep in mind sometimes it may seem that you host is angry and will raise his voice when negotiating price, this is generally a part of the game, this is common when dealing with taxis, markets salesmen, and people selling things on  the street. Don't get worried it's normal and just really a show.

Water
While the water in safe to drink in Marrakesh, it's highly chlorinated and your body may not be used to the bacteria, so to avoid that as it is suggested to drink bottle water, it's up to you, but most travelers don't take chances even when brushing their teeth.

Safety
-While Morocco is a fairly safe country there are a few things to aware of. Here are some of them:

---Stay alert to cars, motorbikes and horse-drawn-carriage traffic, which whizz around the perimeter of the plaza (cars are banned after 2pm.)

---Be on guard against pickpockets and rogue gropers who are known to work the crowds, particularly after sunset.
​------
----Hustlers may attach themselves to you using the excuse of a letter (“Could you help translate or write one?”), or by pretending to be someone you have met but forgotten – so if someone you don’t remember says, “Hey, remember me? be polite and ,move on.

---A variation on this is the fake breakdown, where people on the road flag down passing tourists and ask them to take a note to a “mechanic”, who turns out to be a carpet salesman.

Women who do Henna will be insistent and sometimes grab your arm. Be firm, if they do stop give them the evil eye. IF you do want henna done, only do regular brown henna and not the black henna as it can irritate nd burn the skin. It lasts two weeks or so, and can be done at the certain places without worry, just ask your Host.

Walking
The Medina is very close to a lot of the major tourist attractions within a Km or so, and the souk  is large, so bring a good pair of hiking shoes with insoles to keep your feet from hurting too much. This also does well for the villages as there is not always paved roads and uneven dirt roads provide your path.

Banned Items
While Morocco is a very tolerant country compared to others certain things are not allowed to bring into the country:
1. Drones
2. Items from Israel
3. Arabic Bibles
4. Guns
5. Illegal Drugs
6. Pornography
7. Over 150ml of perfume
8. Possibly Ambien
9. Excessive amounts of Alcohol

Regarding medicines
Bring any prescriptions with you in the original bottles with labels and only the amount you will need for the trip.
​ 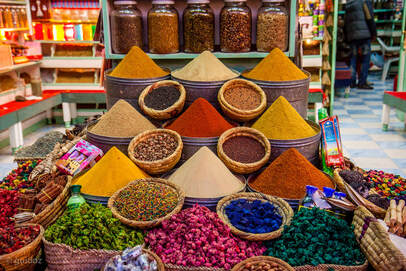