Today you will be picked up by a private vehicle and taken to several lesser visited ancient ruins. In Saqqara, Dashur, and Memphis, the original capital of Egypt.  As you have the private vehicle for the whole day you will have as much time you want to visit these sites.  Here you will feel like a true Expeditionist as you descend into the Red Pyramid and explore this ancient tomb. And since they have opened the Bent Pyramid to Tourists, just recently, you will some of the first people in the world to see this wonder. 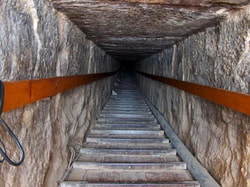 Some of the sites you may visit depending on time are:
The Red Pyramid
The Bent Pyramid
The Step Pyramid
The Black Pyramid
Pyramid of Unas
Pyramid of Teti
Pyramid of Djedkare Ise
Pyramid of Khendjer
The Ancient Capital city of Memphis
The Colossal Statue of Ramesses
Saqqara and DahSur
​Saqqara is a vast, ancient burial ground in Egypt , serving as the necropolis for the Ancient Egyptian capital, Memphis. Saqqara features numerous pyramids, including the world-famous Step pyramid of Djoser, and covers an area of around 7 by 1.5 km (4.35 by 0.93 mi).
At Saqqara, the oldest complete stone building complex known in history was built: Djoser's step pyramid, built during the Third Dynasty. Another 16 Egyptian kings built pyramids at Saqqara, which are now in various states of preservation or dilapidation.

South of the area known as Saqqara lies Dahshur. The area running from Giza to Dahshur has been used as a necropolis by the inhabitants of Memphis at different times, and it was designated as a World Heritage Site by UNESCO in 1979. Dahshur is a royal necropolis located in the desert on the west bank of the Nile approximately 40 kilometres (25 mi) south of Cairo. It is known chiefly for several pyramids, two of which are among the oldest, largest and best preserved in Egypt, built from 2613–2589 BC. The first of the Dahshur pyramids was the Bent Pyramid (2613 – 2589 BC), built under the rule of King Sneferu, The Bent Pyramid was the first attempt at building a smooth sided pyramid, but proved to be an unsuccessful build due to the miscalculations made on the structural weight that was being placed onto the soft ground (sand, gravel, and clay) which had a tendency to subside. Other calculations that were proven to be erroneous were that the blocks being used were cut in such a manner that when placed onto the pyramid their weight was not distributed appropriately, causing the angle of the pyramid to be off and achieving the name “The Bent Pyramid”.
Realizing his shortcomings and learning from his mistakes, King Sneferu ordered the building of the second pyramid of Dahshur, the Red Pyramid. Once completed, the pyramid was considered to be a success, as it was a fully constructed, smooth sided, and a free standing pyramid rising to a height of 341 feet (104 meters), with an angle of 43 degrees. The Red Pyramid’s name reigns from the material that was used to construct the pyramid, red limestone. And this pyramid is believed to be the resting place of King Sneferu.
Memphis
Memphis was the ancient capital of Aneb-Hetch, the first nome of Lower Egypt. Its ruins are located near the town of Mit Rahina, 20 km (12 mi) south of Giza.
According to legend related by Manetho, the city was founded by the pharaoh Menes. Capital of Egypt during the Old Kingdom, it remained an important city throughout ancient Egyptian history. Its principal port, Peru-nefer, harboured a high density of workshops, factories, and warehouses that distributed food and merchandise throughout the ancient kingdom. During its golden age, Memphis thrived as a regional centre for commerce, trade, and religion.
Memphis was believed to be under the protection of the god Ptah, the patron of craftsmen. Its great temple, The history of Memphis is closely linked to that of the country itself. Its eventual downfall is believed to be due to the loss of its economic significance in late antiquity, following the rise of coastal Alexandria. The ruins of the former capital today offer fragmented evidence of its past. They have been preserved, as a World Heritage Site since 1979.

Today you will head to the world famous Museum of Egyptian Antiquities  home to an extensive collection of ancient Egyptian antiquities. It has 120,000 items, with a representative amount on display, the remainder in storeroom and an excellent Mummy display. It is one of the best museums in the world.
Egyptian   Museum
The Egyptian Museum of Antiquities contains many important pieces of ancient Egyptian history. It houses the world’s largest collection of Pharaonic antiquities. This i the 4th Egyptian Musuem since the conception in 1.835.
Now sitting in Tahrir Square, it remains one of the must see sites since 1902. During the Egyptian Revolution of 2011, the museum was broken into, and two mummies were destroyed. several artifacts were also shown to have been damaged, andaround 50 objects were lost, since then 25 objects have been found. Those that were restored were put on display in September 2013 in an exhibition entitled Damaged and Restored. Among the displayed artifacts are two statues of King Tutankhamun made of cedar wood and covered with gold, a statue of King Akhenaten, ushabti statues that belonged to the Nubian kings, a mummy of a child and a small polychrome glass vase.
There are two main floors in the museum, the ground floor and the first floor. On the ground floor there is an extensive collection of papyrus and coins used in the Ancient world. The numerous pieces of papyrus are generally small fragments, due to their decay over the past two millennia. Several languages are found on these pieces, including Greek, Latin, Arabic, and ancient Egyptian. The coins found on this floor are made of many different metals, including gold, silver, and bronze. The coins are not only Egyptian, but also Greek, Roman, and Islamic. This has helped historians research the history of Ancient Egyptian trade.
Also on the ground floor are artifacts from the New Kingdom, the time period between 1550 and 1069 BC. These artifacts are generally larger than items created in earlier centuries. Those items include statues, tables, and coffins (sarcophagi), it also contains 42 rooms, upon entering through the security check in the building, one looks toward the atrium and the rear of the building with many items on view from sarcophagi and boats to enormous statues.
On the first floor there are artifacts from the final two dynasties of Egypt, including items from the tombs of the Pharaohs Thutmosis III, Thutmosis IV, Amenophis II, Hatshepsut, and the courtier Maiherpri, as well as many artifacts from the Valley of the Kings, in particular the material from the intact tombs of Tutankhamun and Psusennes I. Two special rooms contain a number of mummies of kings and other royal family members of the New Kingdom.
Later in the afternoon you will visit the local Souk Khan el-Khalili,  originally the site of the mausoleum known as the turbat az-za'faraan (Saffron Tomb) where you will be able to deeply haggle some
great bargains. And wander the ancient market.

That early evening we will have a day hotel to refresh up before you head out on the Night Train to your next destnation of Aswan and get some rest in our train sleeper cars.
____________________________________________
​Day 5:
Nubian Paradise ​
​
This morning at 7:55 am you will arrive in Aswan, a beautiful Southern city filled with Nubain mysteries, and your jumping off point to Abu Simbel. You will drop your luggage off at your hotel and head out for your adventures.
You will go to the ferry docks to take a boat to Philae Island where we will explore The Isis Temple, built in the reign of Nectanebo I during 380-362 BC.
After that you will head to the Nubian Museum, dedicated to Nubian culture and civilization  on Elephantine Island, and then wander and explore the Nubian Village to experience their culture.
Later we will come back to the hotel for relaxation
Tonight will be an early night as you head out in the extreme early hours in the morning for our tour to Abu Simbel.
Aswan
Aswan is the ancient city of Swenett, later known as Syene, which in antiquity was the frontier town of Ancient Egypt facing the south. Swenett is supposed to have derived its name from an Egyptian goddess with the same name. This goddess later was identified as Eileithyia by the Greeks and Lucina by the Romans during their occupation of Ancient Egypt because of the similar association of their goddesses with childbirth, and of which the import is "the opener".
Because the Ancient Egyptians oriented themselves toward the origin of the life-giving waters of the Nile in the south, and as Swenett was the southernmost town in the country, Egypt always was conceived to "open" or begin at Swenett. The city stood upon a peninsula on the right (east) bank of the Nile, immediately below (and north of) the first cataract of the flowing waters, which extend to it from Philae. ​

Nubian   Culture
An ethnolinguistic group indigenous to present-day Sudan and southern Egypt who originate from the early inhabitants of the central Nile valley, believed to be one of the earliest cradles of civilization. They speak Nubian languages, part of the Northern Eastern Sudanic languages.
Early Neolithic settlements from prehistoric Egypt have been found in the central Nubian region dating back to 7000 BC, with Wadi Halfa believed to be the oldest settlement in the central Nile valley. Parts of Nubia, such as Ta-Seti, were continuously a part of ancient Egypt throughout the dynastic era. Other parts of Nubia, particularly Southern or Upper Nubia, were at times a part of ancient Pharaonic Egypt and at other times a rival state representing parts of Meroë or the Kingdom of Kush. However, by the Twenty-fifth Dynasty, all of Nubia was united with Egypt, extending down to what is now Khartoum.
The prehistory of Nubia dates to the Paleolithic around 300,000 years ago. By about 6000 BCE, peoples in the region had developed an agricultural economy. They began using a system of writing relatively late in their history, when they adopted the Egyptian hieroglyphic system.​ 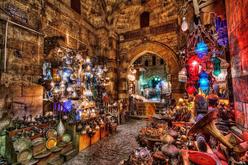