After you pay for your visa, get through immigration, and get through customs.  You will be greeted by your Nomad host upon arrival or a Private driver with a sign with your name on it outside the exit doors from the terminal then whisked off by private car or Uber to your hotel in Giza.
After checking into your hotel you will have time to get some relax and get sleep before your adventures the next day.

After awaking to a view of the Giza Pyramids and a breakfast, in the afternoon you will take it easy this first day, and explore the city to get your bearings, you will most likely visit the City of the Dead, Garbage City, and The Cave Cathedral this day, an eye opening deep travel experience of Egypt , most tourists never see.   Maybe wander the Old Souk in Cairo, enjoying some street food and have some wonderful tradition Koshary tea. This evening we will have dinner on the Nile on a dinner cruise complete with a traditional show.
​___________________________________
Day 2:
The Great Tombs of Pharaohs at Giza
​
After rising early you will take a short walk to the Giza Pyramids to get to in before the crowds and heat. You will have the opportunity to spend as much time as you want to venture into several pyramids of the past, Pharaohs and the Queens and explore the last standing of the 7 Wonders of the Ancient world.  Along side these wonders is the mysterious Great Sphinx and the Solar Boat Museum.
​
Click    for   More   on   the   Giza   Pyramids
The Great pyramid also known as the Pyramid of Khufu or the Pyramid of Cheops is the oldest and largest of the three pyramids in the Giza pyramid complex. It is the oldest of the Seven Wonders of the Ancient World, and the only one to remain largely intact. Egyptologists believe the pyramid was built as a tomb for the Fourth Dynasty Egyptian pharaoh Khufu (often Hellenized as "Cheops") and was constructed over a 20-year period. Khufu's vizier, Hemiunu is believed by some to be the architect of the Great Pyramid.  Egyptologists believe that the pyramid was built as a tomb concluding around 2560 BC.  Originally, the Great Pyramid was covered by limestone casing stones that formed a smooth outer surface; what is seen today is the underlying core structure. Some of the casing stones that once covered the structure can still be seen around the base.
There are three known chambers inside the Great Pyramid. The lowest chamber is cut into the bedrock upon which the pyramid was built and was unfinished. The presumed Queen's Chamber and King's Chamber are higher up within the pyramid structure. The main part of the Giza complex is a set of buildings that included two mortuary temples in honour of Khufu, three smaller pyramids for Khufu's wives, an even smaller "satellite" pyramid, a raised causeway connecting the two temples, and small mastaba tombs surrounding the pyramid for nobles.

Khafre’s pyramid complex consists of a valley temple, the Sphinx temple, a causeway, a mortuary temple and the king’s pyramid. The valley temple yielded several statues of Khafre.  Khafre’s complex contained five boat-pits and a subsidiary pyramid with a serdab. Khafre's pyramid appears larger than the adjacent Khufu Pyramid by virtue of its more elevated location, and the steeper angle of inclination of its construction—it is, in fact, smaller in both height and volume.

Click   For   more   on   the   Great   Sphinx
The Great Sphinx of Giza is a limestone statue of a reclining sphinx, a mythical creature with the body of a lion and the head of a human. Facing directly from West to East, it stands on the Giza Plateau on the west bank of the Nile in Giza, Egypt. The face of the Sphinx is generally believed to represent the Pharaoh Khafre.
Cut from the bedrock, the original shape of the Sphinx has been restored with layers of blocks. It measures 73 metres (240 ft) long from paw to tail, 20.21 m (66.31 ft) high from the base to the top of the head and 19 metres (62 ft) wide at its rear haunches. It is the oldest known monumental sculpture in Egypt and is commonly believed to have been built by ancient Egyptians of the Old Kingdom during the reign of the Pharaoh Khafre (c. 2558–2532 BC).
Colin Reader has proposed that the Sphinx was probably the focus of solar worship in the Early Dynastic Period, before the Giza Plateau became a necropolis in the Old Kingdom (c. 2686–2134 BC). He ties this in with his conclusions that the Sphinx, the Sphinx temple, the Causeway and the Khafra mortuary temple are all part of a complex which predates Dynasty IV (c. 2613–2494 BC). The lion has long been a symbol associated with the sun in ancient Near Eastern civilizations. Images depicting the Egyptian king in the form of a lion smiting his enemies date as far back as the Early Dynastic Period.
In the New Kingdom, the Sphinx became more specifically associated with the god Hor-em-akhet  or "Horus-at-the-Horizon", which represented the pharaoh in his role as the Shesep-ankh of the god Atum. Pharaoh Amenhotep II (1427–1401 or 1397 BC) built a temple to the north east of the Sphinx nearly 1000 years after its construction, and dedicated it to the cult of Hor-em-akhet. 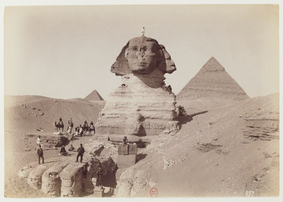 In the afternoon you will have a chance to explore on your own if you choose or join the group for some lunch and exploration.  In the the evening you will join enjoy a felucca sunset ride on the Nile. And then have a local  dinner, and relax on your rooftop terrace to watch the Pyramids Light show, enjoy a few good drinks and maybe a shisha, a traditional water pipe with flavored with dried fruit. 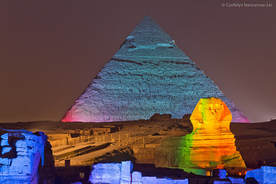