Culture & Etiquette- Page 1​
As with any Journeys you are thrust into a different culture, and this Mystical Morocco Journey is no different. This is just some of the things you should be aware of.  ​

Overview
On the whole, Moroccans are tolerant and extremely hospitable. Though most people are religious, they are generally easy-going. Nonetheless, you should try not to affront people’s religious beliefs, especially those of older, more conservative people. Avoid, for example, wearing revealing clothes, kissing and cuddling in public

How to Greet Someone
People of different sexes rarely shake hands, so depending on the comfort level of of the situation it's best to wait to be offered by the Moroccan individual first.  For two men the situation is different and a handshake is acceptable and can be used as a tool in the souks.  After shaking hands, touching the hand to the heart is a sign of respect. This is not limited to one's elders; it is common to see adults touching their hearts after shaking hands with a child. In addition, a person at a distance will usually make eye contact and touch his hand to his heart.
If two people of the same sex are close friends, then a greeting with a kiss on the cheeks is a normal greeting while gripping hands. Two men and or two women also tend to walk holding hands, this common in several Arabic countries.  While men and women even married do not show public displays of affection.
If you are complimented or someone says “to your health” to you, a good answer is “Allah y-barak fik.” This means God give you blessing and is a form of thanksgiving that gives blessing and gives credit to God.

How to Dress
​Clothes are a particularly important part of Moroccan culture and etiquette. Many Moroccans, especially in rural areas, may be offended by clothes that do not fully cover parts of the body considered “private”, including both legs and shoulders, especially for women. It is true that most young Moroccan women don’t wear a veil - though they may well wear a headscarf - and in cities Moroccan some women wear short-sleeved tops and knee-length skirts. But as a result, they may then suffer more harassment. It is always best to dress conservative as you are the foreigner here and you should respect all the people. The The Muslim idea of “modest dress” requires women to be covered from wrist to ankle, and men from over the shoulder to below the knee.

Table Etiquette
​Eating in local cafés, or if invited to a home, you may notice the etiquette in Morocco is to use your hands rather than a knife and fork. Muslims eat only with the right hand (the left is used for the toilet), and you should do likewise. Hold the bread between the fingers and use your thumb as a scoop; it’s often easier to discard the soft centre of the bread and to use the crust only.

When eating from a communal plate at someone’s home, the table etiquette in Morocco is to take only what is immediately in front of you, unless specifically offered a piece of meat by the host. Wait until the host says “Bismiallah” (In the name of God) before you start eating. Salads will be placed around the table so that you can reach each type and share with your neighbor. If you are eating couscous, a spoon will most likely be provided to you. Some of the older generation still have the skill of forming the couscous into balls with their fingers, but you may be given spoons when you eat with the family.
When you sit back, it gives a signal that you are finished eating. It is funny help and confusing  for the  Moroccan  hosts to watch you lean back and then continue eating and then lean back again over and over. When you are really finished, sit back and relax. If you are eating couscous or salad, you can turn your spoon or fork upside-down.

Visiting Homes
When invited to a home, you normally take your shoes off before entering the reception rooms – follow your host’s lead. It is Moroccan custom to take a gift: sweet pastries or tea and sugar are always acceptable, and you might even take meat (by arrangement – a chicken from the countryside for example, still alive of course) to a poorer home.

Tipping
The etiquette in Morocco is to tip – among others – waiters in cafés (1dh per person) and restaurants (5dh or so in moderate places) museum and monument curators (3–5dh); gardiens de voitures (5dh); filling station attendants (3–5dh); and porters who load your baggage onto buses (5dh). Taxi drivers do not expect a tip.

Mosques
Sadly Tourists are not allowed in most mosques in Morocco if you are non-Muslim, and the only wo that allow it are not on this itinerary as they are far away from where you will bet his trip.

Moroccan Women
The separate roles of the sexes are much more defined than they are in the West, and sexual mores much stricter. In villages and small towns, and even in the Medinas of large cities, many women still wear the veil and the street is strictly the man’s domain. Most Moroccan men still expect to marry a virgin, and most women would never smoke a cigarette or drink in a bar, the general presumption being that only prostitutes do such things.
It should be said, however, that such ideas are gradually disappearing among the urban youth, and you will nowadays find some Moroccan women drinking in the more sophisticated bars, and even more often in cafés, which were, until quite recently, an all-male preserve. In Marrakesh, you’ll see most women without a veil or even a headscarf. You’ll also see young people of both sexes hanging out together, though you can be sure that opportunities for premarital sex are kept to a minimum. Even in traditional Moroccan societies, mountain Berber women, who do most of the hard work, play a much more open role in society, and rarely use a veil.
These customs do not apply to non-Moroccan women and the women in the group can drink freely, when available. Though you will find alcohol is not as available in some places. 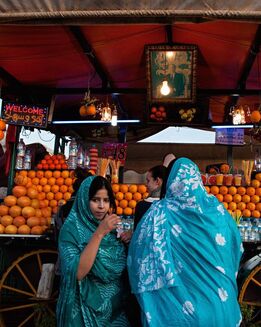